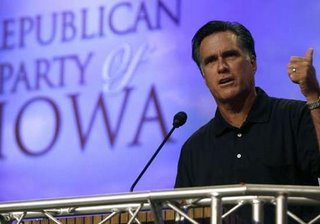 The Democrats are going to nominate either a black man, a woman, or a gay man. We've got this one locked up.

After watching the first two Republican debates, I have to say that I'm heavily leaning towards Tancredo. There's just something about scapegoating a group of people for all of America's problems that just makes me salivate like one of Pavlov's bats.