Now I'm not no tech nerd or nothin' but this thing has been passing through the tech blogosphere and as a blogospherian I felt I should give my two cents (enjoy that phrase while you can; when the Democrats take control, they'll raise it to two dollars). Apparently this nerd thinks that Google putting a link to Google Calendar when someone searches for "calendar" is the most evil thing Google has ever done. Not its deals with China or weird Big Brotherish need to have access to all your information or unsavory business practices or anything, Google has broken its "don't be evil" mantra by putting up a few links. Easy with the moral outrage there, poindexter.

Alright, so I'm looking around on Google Groups trying to find an answer to my dilemma and there's this guy named "panther" who's going around helping people so you think he's some sort of Blogger genius or something but just take a look at his blog

That's some geocities shit right there

Man all I want is to use this little tag picture

where it says "Labels:"


Is that too much to ask for


I know you're out there, reading this


Get off your ass, stop buying youtubes, and help me


what the fuck, seriously

# posted by Vampire Joe McCarthy @ 2:14 AM
How the fuck do I change the tag template

# posted by Vampire Joe McCarthy @ 2:10 AM
Christmas came a little early this year

I don't really know what any of this shit does

Noting that Democrats have pledged to increase transparency and accountability in government, C-SPAN Thursday called on House Speaker-in-waiting Nancy Pelosi (D-Calif.) to give television viewers the same real-time access to views of the House floor as anyone sitting in the gallery would have.

In a Dec. 14 letter, C-SPAN CEO and Chairman Brian Lamb asked Pelosi to roll back the three-decade old practice that put the House Speaker in charge of the cameras. C-SPAN and the House reached the current agreement in 1979 when cameras were first introduced to the chamber. He wrote that he sought a similar agreement in 1994 when Republicans captured control of the House, but he did not get it.

Lamb wrote that the current 28-year-old arrangement is "an anachronism that does a disservice to the institution and to the public…Congressional technicians are limited to taking static, head-on shots of the representative who's speaking at the podium."

Rules and established practices prevent cameras from taking individual reaction shots or from panning the chamber, leaving viewers with an incomplete picture of what's happening in the House," he added.

In addition, Lamb asked Pelosi to immediately post how individual lawmakers voted on a piece of legislation. Currently, the parties' totals appear on screen, but the individual tallies are not posted until hours later.

"Frequently, by the time individual voting records are released by the [House] Clerk, the House has moved on to other issues. The net effect is that this important information is rarely included in C-SPAN's live telecasts of House floor proceedings," Lamb wrote. "Members' votes are the most critical part of the public record."

Pelosi has just received the letter and will review the request, said Jennifer Crider, Pelosi's spokeswoman.

C-SPAN is pressing the House first because its initial coverage of Congress started with the lower chamber, according to a C-SPAN spokesperson.

Well, well, well! Looks like my hard work blogging has finally paid off! 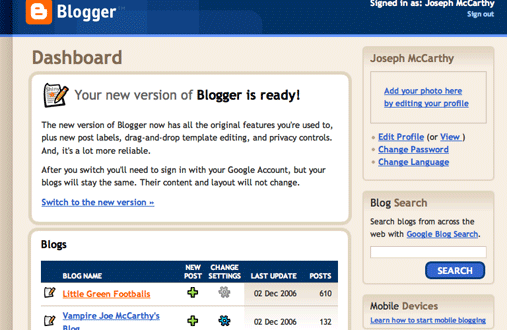 As you can see, Blogger has invited me to join the new version of Blogger. Now, as a darling of the blogosphere, so I'm used to getting to royal treatment. But it's still a nice surprise. Don't have a "Google Account," whatever that is. I've had my problems with Google in the past, but this shouldn't be a big deal. Trust me, Google does not want to get on the wrong side of Ol' Tailgunner Joe here.

I'm thinking next year I'll take the plunge, so to speak. Come next January, I'll be blogging on the platform of the future while you chowderheads are still stuck in the past.

current music: the posies - i may hate you sometimes (but i'll always love you)

The M-S-M is scattering around like a bunch of chickens with their heads cut off over whether to call the kerfuffle over in Iraq "civil war" or not.

Now look here guys. There was already a "Civil War" in the 1800s, remember? Get a new name.